A Land Without Gods : Interlude 1 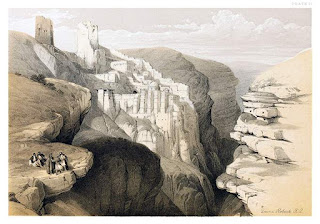 Seven months ago. Two weeks following the Fields of Slaughter.

Aranasius, last god of the Firebrand Pantheon, had lost his beard.

This wasn’t to say it got burned or sheared or simply yanked away - Aranasius’ beard, like all of his hair, was a living creature, and it has gone missing. It was a sorry situation to be sure- what was the god of hair and beards worth if he didn’t even have a beard! He was a minor god in any case, but without half of his Mantel, he might as well be a glorified demigod! He was staring at himself in a mirror framed with liquid mercury, horrified at seeing his chin for the first time in a thousand years. Surely it didn’t use to be this weak, right? Oh, there was no end to his troubles!

Take for example the fact that his entire family, brothers and sisters, mother and father, were all dead. But that was a secondary concern all things considered.

“Nasi? Nasi, Nelor has called for a general assembly! Would you get out of the damned privy already? It’s been a week!”

Well, technically not all of his family was dead. The one speaking through the gem-studded doors of the privy was his cousin, Fanar, goddess of bindings. She got married off to the Dark Dust Pantheon a century or two ago and so wasn’t technically considered family anymore, but considering the number of gods left alive after the Fields of Slaughter could be counted on a human’s fingers and toes, he was willing to make an exception. He was not fond of that nickname she had for him however.

“Tell Nelor that I’m… indisposed. Yes, indisposed with a terrible malady of the humors! Biles entirely misaligned, organs all over the place, I’m sure he’ll understand.”

Bloody Fanar and bloody Nelor the Nurse and all the rest of them too. Couldn’t they see he was going through an existential crisis? His beard, his pride and joy (as well as his best friend, though he would never admit it) was missing! Who knows what trouble it could’ve ran into? The world wasn’t exactly the safest place at the moment, and though once Aranasius would’ve considered the Ascended Peak to be an impenetrable and utterly secure fortress, with the Icon’s betrayal he wasn’t sure of anything anymore.

Oh, his poor beard, it must be so scared and alone, with nary a pint of oil to keep it combed and healthy! Surely, this would be remembered as the most terrible tragedy of the age.

Well, there were the Fields of Slaughter, but still.

“Nasi, this has gone on for long enough! if you don’t come out now I’m going to get Blavius to break down the doors and drag you out!”

Of course she had to bring Blavius into this. Fanar was obnoxiously proud of her husband, and in some incredibly unlikely turn of events, the mad fool actually survived the Fields. How could the god of weaponry of all people survive such a battle? He should be ashamed of himself! Probably should’ve found his own privy to hide in if there was any decency to be found in him.

Then again, he was part of the Dark Dust Pantheon. They weren’t exactly known for their decency.

Oh. Was that bad?

Nelor, god of medicine, known derisively as Nelor the Nurse by fools both mortal and divine, leaned heavily on his staff of solid twilight. He was ancient even for a god, was likely as old as all the rest of the surviving gods combined, and yet even he, perhaps a hundred thousand years old, had never seen a situation so dire. The obsidian snake which wrapped around the staff whispered sweet calming psalms to try and sooth the old god, but today they did little to help.

Nelor remembered the days after the War of Hosts and the fall of the titans, of months toiling away in the Ascended Peak’s hospital trying to save just one more god from the blighted wounds left by the abyssals, only to fail eight times out of ten. The Peak’s golden halls ran black with ichor and its catacombs swelled to thrice their previous size. Those few he and the other healing gods did manage to save rarely thanked them - crippled and traumatized by their grievous, poisonous injuries, few ever made a true recovery. Most wounded gods either slowly faded away over the years and decades after the war, or disappeared entirely, never to be seen again. A good half of all gods died that day, entire pantheons wiped out.

No ichor stained the hallowed halls of the Ascended Peak now. Few gods even made it back to the gods' high home at all after the Fields of Slaughter. The catacombs would not swell either, since the gods were forced to leave their dead in the field, to be devoured by foul abyssals or, much worse, left to the machinations of the Devils and the traitor Icon. If half the gods died in the War of Hosts, nine of ten of those who remained perished at the Fields. No pantheon had more than two surviving gods to its name, and most were totally annihilated.

Nelor felt his hands tremble. They had always been so steady, as befitting a physician. They had not shaken when he had operated on his own father, whose every bone was broken by the Colossus of the Fall. His father had survived, and mocked Nelor for his efforts, his disappointment of a son. They were still as stone as he stitched together the divine essence of his sister, gored by the rancid tusks of a wyrmboar. She pulled through and spat in his face, her weak, effente brother, so unfit to belong to the esteemed Highforge Pantheon, the pantheon of warriors. Nelor’s hands did not even shake as his only son died in his hands, cleaved in twain by a raging abyssal in the Fields. But now, they trembled.

The Eternal Engine has stopped. Doom has come to them all.

Few appreciated the importance of the Engine. Stationed at the very heart of the Ascended Peak and operated by the oldest angel in creation, the Engine was merely a symbol of the infinitely complex mechanism that governed the Mantles of the gods and distribution of souls, of no real significance by itself. No one knew when it was created or by who, but surely that mattered little. All the Engine did after all was to softly rumble as the world’s souls and energy passed through it as they were distributed to the various pantheons. It didn’t actually do anything, everybody knew that.

Everybody could not have been more wrong.

The relationship between gods and mortals was symbiotic - mortal perception (or as some would prefer it, faith) created the energy to power the Mantles of the gods, the source of their powers and identities. Without guidance, however, this energy was too unfocused to do much else. The gods gathered the energy of faith and used their Mantles to focus it like a lens, allowing them to use their power for the benefit of their mortal believers, to transfer power between gods of the same pantheon, to create angelic servitors and script and most importantly, to govern the reincarnation of mortal souls. This was the commonly understood dynamic between the mundane and the divine. And it was a lie.

Nelor was roused from his musings by his fellow gods entering the Heart Room, finally answering his urgent summons. So few of them, and fewer still of any real worth. He grimaced when he saw that simpleton Aranasius wandering in as if he had accidentally gotten there on his way to the larder. That the idiot survived and his august brother Corinth perished was further demonstration of the callous and arbitrary nature of the universe. At least Aranasius wasn’t sporting that ridiculous beard of his today. It was to these poor excuses for gods that Nelor would have to explain the severity of their situation. He was not looking forward to it.

The truth was that the elder gods were unwilling to reveal just how reliant on the Engine’s power they were to anyone, not even to their own children. Because of this, the true state of things was nearly entirely forgotten over the countless permutations of the divine families. But not by a god as old as Nelor. Despite what the gods themselves believed nowadays they had little capability of actually collecting the energy produced by mortals. They had to be very near their mortal followers to be able to capitalize on their faith, and had to have their followers’ full attention at every stage of the process. This inherently limited their power drastically. It was the Eternal Engine which facilitated the gathering of mortal faith and that allowed it to flow from follower to god wherever either was. It was the Engine that allowed pantheons to share their power, and to easily judge and reincarnate the souls of all that lived in the world. The Engine alone allowed the gods to graduate from mere primitive gatherers, little above common elementals, to farmers of faith, true deities.

And it was through the Engine that new gods were born.

No new gods would replace the fallen in the Fields of Slaughter. Unless the Eternal Engine was repaired, which none knew how to do, the fifteen gods who barely filled one-hundredth of the space in the Heart Chamber would be the last the world would ever know.

Popular posts from this blog

A Land Without Gods, Part I 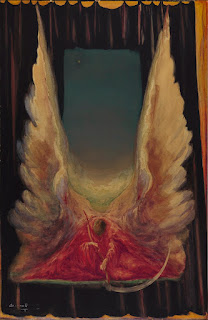 From the journal of Fabius Verr, the 15th of Ashfall, 1249 GB It has been six months since the end of the Icon's War, and the gods, or those few of them who still remain at least, dare not leave the Ascended Peak. Their angels, their brilliant coronas once a common sight in the night sky, have vanished with their masters, leaving the wounded remnants of their flocks to fend for themselves. I can't say I don't sympathize. For the high and mighty, so convinced in their own righteousness and utter invincibility, such a stark reminder must have been unbearable. If I were them, I’d hide as well. Alas, that is a luxury I was not afforded.  When the Icon showed Their true face and turned on the gods, Corinth Silverbrow was devoured in the Fields of Slaughter and I was left a priest without a god. As a minor clergyman, I was amidst the common soldiers as the sky fell (metaphorically) and the last of the gods fled. It was my good fortune to have been stationed with the 12th Grenadie
Read more 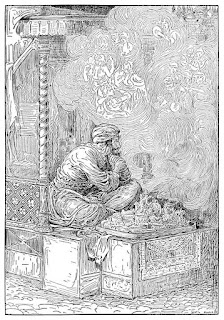 Louis John Rhead I have climbed the mountain, for the Master awaited at the top. I found him sitting below the apple tree, looking into the valleys below. Kestrels flew there, and for a moment I imagined the valley was the sea, the peak the shore, and the birds were some curious type of fish, circling about unseen streams. "You did not come here to watch the birds," said the Master, though he was looking at them himself. "Speak your mind or leave me be." I bowed, because politeness costs nothing. "I have fought in battles great and small, I have hunted beasts, and I have hunted men. I have delved into the depths, and there held a demon's gaze. I have climbed into the heavens, and stolen a dragon’s pearl. All this I did so I could know the meaning of terror. And yet, it eludes me. Tell me, Master, what is the meaning of terror?" The Master looked at me as if I was the world's biggest fool, which I admit was not outside the realm of possibility. &quo
Read more